U2: From The Sky Down – Review

Posted on October 24, 2011 by larrylootsteen

“When I found my voice, it was like I’d been walking with a limp”
Bono – From The Sky Down

As much as this documentary is being sold as the journey U2 went through getting from the ‘Joshua Tree’ band to the ‘Achtung Baby’ band, the reality, or rather the interest for me, came in learning a little something about the people. It also came in understanding how that chasm between who these guys are and their public face for so long ended up messing with the entire chemistry of their music.

The quote you see at the top of this article came directly from the movie. I had to write it down when I heard it. It was Bono talking about knowing from a young age that he had melodies in him but no avenue for letting them out. In one scene he talks about discovering his grandmother’s piano, unable to see the keys but able to reach up and touch them. There is such a powerful sentiment in him saying as he hit one note how much he wanted to find the next note that went well with it.

He goes on to say that “tiny living room would become a cathedral”. And finding his voice truly became the outlet he needed. You could see how having that inside him and bottled up, in his mind, impeded his way of living. The freedom that came from expression helped make him whole in many ways. 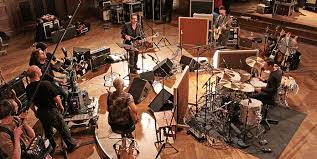 Watching how their endless seriousness really drowned them in so many ways. The discussions around Rattle and Hum were so compelling, so telling. I loved that they wanted to show their journey into American music but their public image really twisted that vision into 4 very serious Irish lads trying to sell Americans their own music.

What a horrifying thing to have happen. Hijacked by your own wants to be taken seriously but being hammered over the head with it so you come off as a bunch of elitist jackasses. The pain that brings and the impact that has on how they would move forward is really something to watch.

I was really afraid this would end up being a documentary about the painful musical journey as opposed to the painful human journey. I was very glad to see the latter was the goal. I was also afraid there would too much of what I already knew versus something different. I think the story told here is something that any music fan would find intriguing, whether a U2 fan or not.

In many ways I could say the same thing about It Might Get Loud. It was something that someone like me, who knows shit all about playing guitar, could enjoy because it was about the journey of the players and not just the music. From The Sky Down works so well for the same reasons. 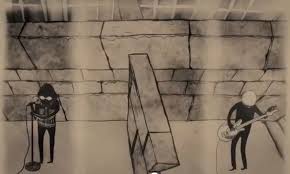 There’s no doubt there’s stuff in here I already knew. Some of it was like ‘ya, ya move on’ but overall they managed to keep that to a minimum and focus both the reality of a band making it up as they go as well as trying to figure out what growing up means as a band.

It is the struggle of people who got too big too fast and all that means. It is the question not enough bands ask about whether they want to make the same music forever or whether they want to really explore and grow. And at the end of the day, the film shows that four guys hanging onto each other for dear life and working through it all is a true expression of love. Like any relationship, things change. How you react to it and making a conscious decision to keep working at it defines what that means.

I’m not going to explore the look back at what happened in the studio. For me the focus is way beyond that. It is important detail to the journey they took. But the reality is, the story is about them. How they fit, how they work and how much they truly care about one another.

This entry was posted in General Commentary, Music and tagged Achtung Baby, dvd, From The Sky Down, movie, review, U2, video. Bookmark the permalink.