I Long For The Day

Posted on September 13, 2012 by larrylootsteen 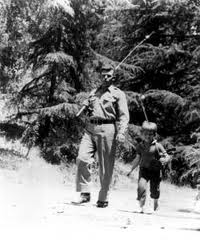 Are you like me? Are you someone who looks at the crap of the world today and wonders why we can’t go back to ‘the good old days’.

Do you sit and think about how much simpler times were? Back when Sheriff Andy and Opie would go fishin’ after school. A time when tv couples had separate beds? A time when the ‘good guys’ always won?

When the milkman left milk at the house? Sharpeners wandered the neighbourhood, ringing the hand-held bell to let you know he was there – ready to sharpen whatever you needed? Ice cream trucks slowly meandering by the house with a throng of kids running behind.

Sigh. Seems so idyllic doesn’t it? So simple. So right.

Except of course there were minor little hiccups in there. You know, that ‘stuff’ that kept creeping into the scenes in our brains. What do you call that stuff again? Oh yes! Reality! Not the stuff of tv shows today. The stuff that actually went on while we were living the valium-laced memories of yesteryear.

Reality like war. Reality like people fighting for basic civil rights. Woman wanting to be equal. The ‘silly’ little impedences to the vision that paints our past. What is it about generations longing for a past that is so clouded by false memories?

I try hard not to be an idiot. I know those days had their share of people working in poor conditions and underpaid. But much more of the population then had the basics covered…home, car, ability to take some small sort of vacation. Not an over-the-top food network dream vacation to Spain or a villa on the Riviera. Maybe a driving vacation to the coast, staying in a motel for a few days. Societal problems were significant but much more of the population was on equal footing and the ability to move from lower-income to middle-income to upper income existed in some form.

Those days are gone.

Actually the truth is that we don’t all want this. And the people who give this ‘good ole day’ the most lip service are the ones least inclined to let it happen.

Our politics and our corporate offices are full of people of want nothing better for any of us. They are not solely on the right-wing side of the political equation though many on the right are the most vociferous on the subject. As the Squirrel Nut Zippers say “Fat cats keep getting fatter”!

We all know our governments, to some significant extent, are influenced at a minimum, controlled at a maximum, by outside money. A significant portion of that comes from corporate lobbies and campaign donations. If nothing else watching the U.S. election process, you can see the truth in the funds raised and the outside interests paying for political ads.

I often wonder if they distributed that cash to their workers instead of paying for advertising to change some regulation that might protect us little folk from some environmental catastrophe or some economic meltdown that won’t hurt them at all, what might be. Sorry for the long-winded sentence there!

When I look at Republicans pining for the days of Reagan when Reagan wouldn’t make the cut in today’s Republican party, I laugh. Then I stop. I get sad. What a world we live in here in North America. And you wonder why most of the world alternately laughs at us and despises us. I know because I actually go look at news sites from other places. America in particular but a growing number at Canada as well (well deserved I might add) are so blind and so stupid.

Sarah Palin for v-p? Herman Cain for President? Michelle Bachmann for President. Todd Akin for legitimate rape? Mitt Romney for whatever suits him today? Stephen Harper as fundamentalist and general mentalist in the Prime Minister’s office?

To all the nutbars from Limbaugh, Levant and Rove on down who have bastardized the meaning of everything. To every asshole who claims their appearance on ‘reality tv’ means something. To every tv pastor and evangelist who has no more belief in God than an atheist. To all those Christians who scream and yell and complain about being slighted in today’s society and who seem to have never actually read what Jesus was about. To every corporation who minimizes wages to ‘control cost’ while taking home millions in bonuses. To every bank that has attached fees to every aspect of the business and who routinely rakes in trillions while people suffer. To every energy company that could give a rats ass about the environment and puts out ads saying “we’re doing our best to make it safe” while pretending this is the only way to “energy independence”. To every politician who forgot they work for us and line their pockets. To every media outlet that forgot what news is and decided that entertainment is the new news. And to all of you, including me, who has let the important things of life…family and friends… be impacted and fallen into the trap of meaninglessness that is food tv, reality tv, Youtube video crap and the blithering nonsense that fills our ears and eyes every single day.

Fuck you all. Fuck me. Fuck us.

We question presidential birth certificates? We listen to Donald Trump AT ALL??? Balanced news on CNN means listening to spin from both sides? What about the fucking issues????? FoxNews?????

Fuck us all. I long for the day where reason reigns. These days I wonder if we can survive this century.

Tell ’em how it is Johnny!

2 Responses to I Long For The Day